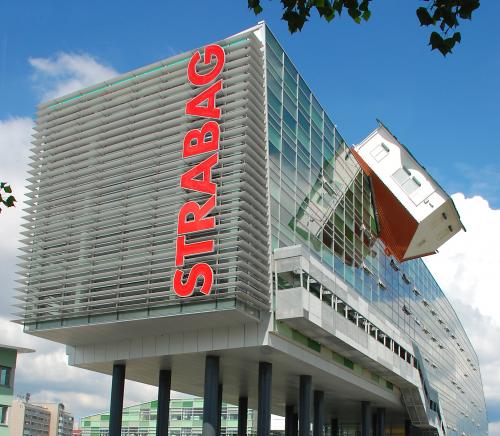 The STRABAG Artcollection is an evolving and constantly growing collection – its various locations have left their trace on the collection, and over time it has come to include works by artists from many generations. STRABAG employees identify with the artpieces that surround them: this, along with positive criticism, contributes to an inspiring atmosphere and enhanced attention to their surroundings. Engagement with art in the workplace has a motivating effect, encouraging lively conversation. This spirit of openness is reflected in the transparency of the company’s architecture. The collection is not stored in a warehouse or a museum: the artworks are put on display in more than sixty STRABAG SE facilities in Austria and abroad. The STRABAG Kunstforum team creates a curatorial concept for each building, taking into account the location’s architectural specificity.

In many of the buildings, particular emphasis has been given to art in the entrance area at first sight: the value that the company puts on art is made clear by the extraordinary works on display here. For example, the foyer of the STRABAG building in Vienna features a powerful, eight-meter-tall work by Helmut Ditsch. In its spacious entrance area, the Bratislava building houses a nine-part splatter painting cycle by Hermann Nitsch, covering an area of six by nine meters. In addition, the sculptures placed in front of the buildings indicate the “museum” content inside: in Bratislava, this includes the sculpture House Attack by Erwin Wurm, while a six-meter high sculpture of a dandelion by Thomas Stimm stands in front of the company premises in Spittal/Drau. In addition to the bronze and aluminum castings by Bruno Gironcoli on the grounds of company headquarters in Vienna – a highlight of the STRABAG Artcollection – nine monumental sculptures by Gironcoli, on permanent loan, are exhibited in the GIRONCOLI-Kristall, a multifunctional art and event space attached to the STRABAG building in Vienna.