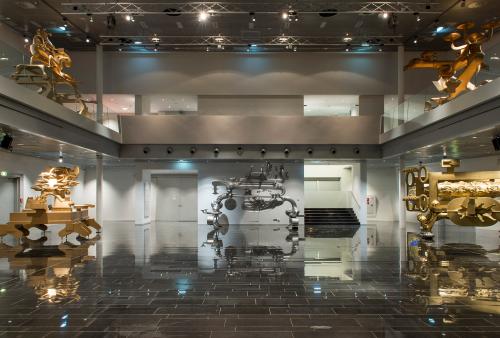 "I believed it was possible to make a connection between commercial activity and artistic modes of expression. This is the result. See for yourself."
Bruno Gironcoli

The sculptures and works on paper of the artist Bruno Gironcoli are highlights of the STRABAG Artcollection.
The GIRONCOLI-Kristall is an art and event Location, which opened in June 2004. It is the first permanent exhibition of works by the internationally-known sculptor Bruno Gironcoli (b. 1936 in Villach, Austria – d. 2010 in Vienna) in Vienna and features nine monumental polyester sculptures.

The machinic-organic “mother sculptures”, several meters tall and colored gold and silver, which date to the 1990s, represented a new experimental space and new focus within Gironcoli’s futuristic work. The huge silver and gold-bronze models were cast as full-scale models in plaster, polyester and metal. Three castings, belonging to the STRABAG Artcollection, are situated on the plaza in front of the STRABAG Building, where they hint at the spectacular interior of the GIRONCOLI-Kristall, which gives a new cultural focus to Vienna’s Donau-City neighborhood.

Influenced by Alberto Giacometti and Parisian existentialism, in his early years Gironcoli worked on the representative potential of the human figure, quickly discovering his own autonomous, reduced idiom of forms. In the 1960s, he created nude sketches, wire sculptures and his first abstract polyester objects. Whereas Gironcoli’s early spatial installations featured objects distributed in space or in display cases, from the 1990s on, he created composite polyester sculptures, assembled from figurative and technical pieces. The mostly-untitled machinic-organic works, several meters in height, were exhibited in the exhibition Die Ungeborenen (The Unbegotten) at MAK Vienna in 1997. In Gironcoli’s countless works on paper, mixed technique works and serial drawings, the motifs of his sculpture are repeated in a rich variety of forms – forming an interplay within the artistic spectrum.